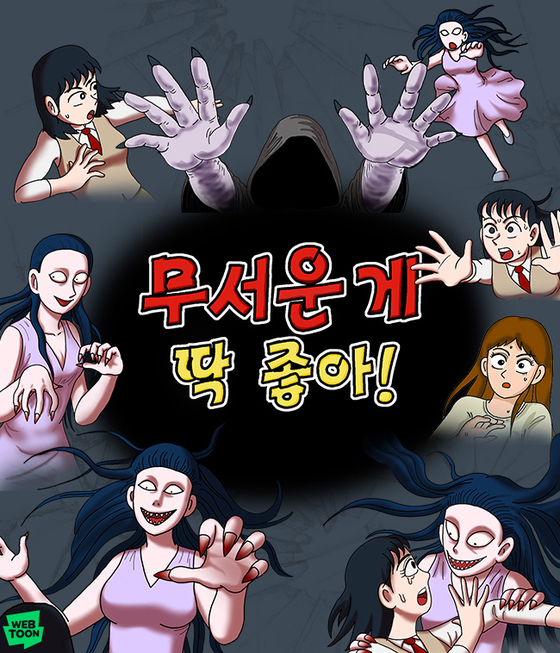 In Korea, before webtoons started dominating smartphone screens, kids were obsessed with comics. Some of the most popular comic series have also served educational purposes, such as teaching Hanja (Chinese characters), or even survival tips for the outdoors.

Children would pile entire series on their shelves, for example the series of children’s comic books on Greek and Roman mythology, which were bestsellers in the early 2000s. Readers found the stories so entertaining when they were children that they were inspired to take mythology-related classes later in college.

A cartoon by cartoonist Lee Dong-kyu, the creator of 12 of the “Tell Me a Creepy Story!” books. [LEE DONG-KYU]

The program “Tell me a scary story!” series was particularly popular. The series consisted of 16 books, featuring spooky ghost-centric short stories. Twelve of the books were written and illustrated by 59-year-old cartoonist Lee Dong-kyu, under the pen name Lee Ku-seong, from 2002 to 2003.

At the time, they filled the majority of the best-selling shelves in the children’s book section of Kyobo Bookstore branches, and at school, the stories were talked about.

The series is no longer available for purchase as it went out of print years ago. However, in August last year, “Tell me a scary story!” returned to Naver Webtoon. Fans of the series, who were in grade school at the height of comics, are once again in favor of its revival, now in adulthood.

Lee sat down for an interview with Korea JoongAng Daily at his studio in central Seoul’s Jung District on Feb. 14.

Lee debuted in 1987 after winning a local competition for beginner cartoonists, but he said even to this day he has to tell everyone that he is the creator of “Tell Me a Creepy Story!” for people to recognize it.

“If I introduce myself as cartoonist Lee Dong-kyu, no one knows who I am,” Lee joked.

Lee drew over a hundred scary short stories that kept kids up at night. With a new book of about 200 pages coming out almost every month, one wonders where he got his inspiration.

Two female spirits haunt the mountains in the episode “Beauty in the Mountains”, where some merchants get into trouble after encountering them. [NAVER WEBTOON]

“[In the early 2000s] there were a lot of horror specials on TV, where celebrities would light candles and tell each other scary stories,” Lee explained. “At the time, copyright issues weren’t really taken seriously, so I got a lot of ideas from those shows, as well as online blog posts. If I thought a specific pattern would work, I’d create something out of it, and maybe even mix a few together.

After Lee finished writing the 12th book in the series, he took a long break from creating new comics and mainly taught at universities. Lee says it was thanks to his fans that he was able to bring the show back.

“I updated some stuff on my blog [on Naver] for at least 10 years,” Lee said. “More than 90,000 people visited my blog, then the JoongAng Ilbo published an article [on its Naver channel] titled “5 Comics That Bring Back Memories to Those Born in the 90s”. “Tell me a scary story!” was ranked #1.”

After JoongAng Ilbo’s article was published in March 2019, fans began flooding Lee’s blog and contacted him asking him to bring the series back as a webtoon, as the books were no longer in print. Lee was amazed at how, even after all these years, people still remembered his comics.

In this photo taken in 2002, children flocked to bookstores to read their favorite comic books – ‘Tell me a scary story!’ was part of it. [JOONGANG PHOTO]

“A fan told me he couldn’t read my comics when he was little because his mom wouldn’t buy them,” Lee said. “So they begged me to serialize it in a webtoon so they could finally read it since they’re adults now.”

The original plan was to upload just five episodes chosen “to see how readers would react”, but the comic-turned-webtoon blew up instantly.

After unveiling its first episode on August 24 last year, the series has risen to number one on Naver Webtoon’s trending webtoon list. All current episodes have ratings in the range of nine points.

With the webtoon gaining attention, Naver Webtoon announced in the third episode that another 10 episodes would be released.

In each episode, fans are eager to point out in the comments what’s changed in the new version, with some comparing differences in artwork or plot.

“I had a really busy schedule when I was writing the books, and there were limits to what I could fit on the pages. So I always thought the books could have been better if I had more time,” Lee said. “The webtoon versions got a lot longer because I added more detail into the stories.”

For example, the protagonists in the original comics were children, but in the webtoon, recurring characters Kyung-hee and Seong-hye are portrayed as adults. They were named after two of Lee’s close friends in college.

In the episode “Elevator”, two doctors ride a haunted elevator filled with vindictive spirits after working night shifts at a hospital. [NAVER WEBTOON]

One episode, titled “Elevator”, is about two doctors who work night shifts at a hospital and end up riding in a haunted elevator filled with vindictive spirits. In the original story, that was pretty much all there was to the story, but Lee added more details to the webtoon, such as a conversation between doctors about the difficulties of working in the medical field. The webtoon story is also set on Ghost Day, the 15th day of the seventh month of the lunar calendar, which according to Chinese culture is when ghosts visit the living.

Lee said he mostly received positive feedback from fans for his longer, more descriptive stories. However, in some parts that Lee edited, such as changing the illustrations from flip phones to smartphones to fit the current context, some fans expressed disapproval.

“I never thought it would become a problem, but some readers apparently want flip phones to stay exactly as they were in the early 2000s,” Lee said. “Since the books are a memento from their primary school years, I guess they don’t want the story to ‘grow up’ too, but just stay as it is. So now I try to maintain the setting in 2005,” laughed Lee.

The beauty of “Tell me a scary story!” was the way the illustrations and plot suited children, while still creating a weirdness, as intended. The designs are not as graphic as one would expect for the horror genre and deemed appropriate for children.

“The problem with these stories is that there are no explicit scenes,” Lee explained. “It’s all about the atmosphere and the fear that a ghost might appear. There are no scenes where someone gets attacked by a ghost and dies after being shredded.

The famous episode “The Red Mask” tells the story of a slit-mouthed woman who covers her face with a red mask. She walks around asking everyone if she’s pretty, but kills you despite your answer. In this scene, the woman asks, “Everyone says I’m pretty” and “Am I really that pretty?” [NAVER WEBTOON]

The character of the woman with the slit mouth who asks: “Am I still pretty?” after removing his red mask. [NAVER WEBTOON]

One of the most famous stories from Lee’s books “The Red Mask” is an adaptation of the Japanese urban legend “Kuchisake-onna,” which translates to “slit-mouthed woman.” It tells the story of a woman who covers her face with a red mask to hide her mouth, which is split from ear to ear. When meeting the woman, she will ask you if she is pretty but will kill you no matter what you answer. Some of the ways to get rid of her are to give her cinnamon candy or write the hanja for “dog” on the palm of your hand.

“In my stories, the ghosts are pretty much everywhere, including the bathroom and the elevator. That’s what made the kids afraid to go to those places alone,” Lee said. ‘The Red Mask’, the main character meets the ghost [the slit-mouthed woman] at a fork in a road, so the kids were actually scared to cross those places on their own. »

“I was afraid to walk through the alleys at night when I was little,” said Choi Min-seong, 24, who lives in Songpa district, south of Seoul. Choi was an avid reader of the series when he was younger. “I remember often writing the hanja for ‘dog’ on my hand.”

“I’ve heard many cases of kids being terrified of moving on to the next page, or even having to sleep next to their parents at night, causing their parents to throw away the comics,” said said Lee.

Lee plans to release more episodes of the original comics, in addition to new, never-before-seen episodes.

“I thought about my plans after ‘Tell me a scary story! “and I want to try to release new episodes,” Lee said. “But I’m going to have to get it through Naver first. Nothing is decided yet. »

The two recurring characters from the webtoon version are Kyung-hee, above, and Seong-hye, below. [LEE DONG-KYU]

Throughout the interview, Lee’s eyes shone with a certain thrill and anticipation. His once-completed series is now enjoying a new breath of life.

“I didn’t expect it to suddenly come back to such recognition after all these years,” Lee said. “I was satisfied that it remains a treasured memory among my readers. Now it’s an example for budding cartoonists that something like this is possible and can happen.