STARHENGE TOME 1: THE DRAGON AND THE BOAR: War through time 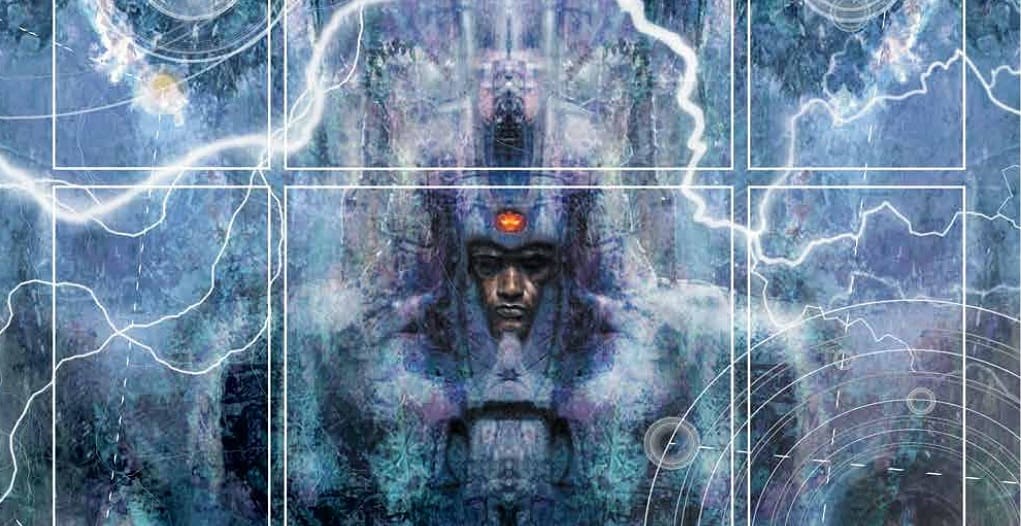 Imagine if Frank Frazetta, HR Giger and TH White (he wrote The Once and Future King) got together and created a sci-fi comic based on the Arthurian legend. Sounds amazing, doesn’t it? Well, that’s exactly what Liam Sharp has accomplished and frankly, it’s astounding. Buckle up your belt…

Let’s start with art first. Liam Sharp is a master of his medium. Just look at his work to find out. I mentioned Frazetta and Giger specifically earlier because while Sharp is undoubtedly an original himself, this comic split into three specific eras echoes Frazetta’s work in the parts set in the distant barbaric past of the game. humanity and I can’t help but see Giger’s influence in the future defining a part of the book in everything from the design of the spaceship to the appearance of the altered or rather “carked” characters of the future. I say influenced because everything Sharp does on the page is quirky and beautifully rendered but the echoes are there, even the horrid AI enemy is mesmerizing to watch. Those two parts of the book alone are worth the price of admission, but then Sharp does something wonderfully unexpected, he ties it all together with a narration and a section set in or very close to our present, that’s clearly his own thing in terms of art. While I’m sure everyone will no doubt rave about the marvel of Sharp’s ancient fantasy and sci-fi elements (and it’s brilliant, intricate, mouth-watering pages that capture the barbaric past and cold from the distant future), it’s those pages featuring the character of Amber Weaver as she talks to a young man she’s involved with and her storytelling through the book that ties it all together into a cohesive whole and crashes the decor.

So I knew what an artist Sharp was, but honestly I had NO IDEA how good a writer he was. Sharp does EVERYTHING in this book including the lettering which looks great by the way, its placement reflects Sharp’s absolute control over everything on the page and flows beautifully through the amazing images on the page like a perfectly cut flow that provides you the information to navigate the story laid out in front of you on the page. The basic idea is quite simple: we start in the past with a mysterious death, jump into the future for a history lesson that sets the stage, touch the present to meet our narrator, then travel back to the future to meet our Merlin or rather MER LIN and the scene is set before jumping into the past as Sharp cleverly links the last pages to the first to form a perfect circle that explains a lot. Sharp doesn’t lay all the cards on the table either, it gives the reader enough credit to follow the story without explaining everything to you. like Mordred and Merlin are there if you look for them. another fantastic element is how Sharp makes the future war between AI and humans a war on many fronts or planes by adding another fascinating element like a matrix to the sci-fi part of the story.

It’s an opener that does exactly what it’s supposed to do…makes you want more immediately. It’s a complex mix of sci-fi and fantasy with Magic at its core bound by a wonderful chain of humanity.

From the Tate Modern and the London Underground to Selby Market, meet the writer-in-residence who collects the city’s stories