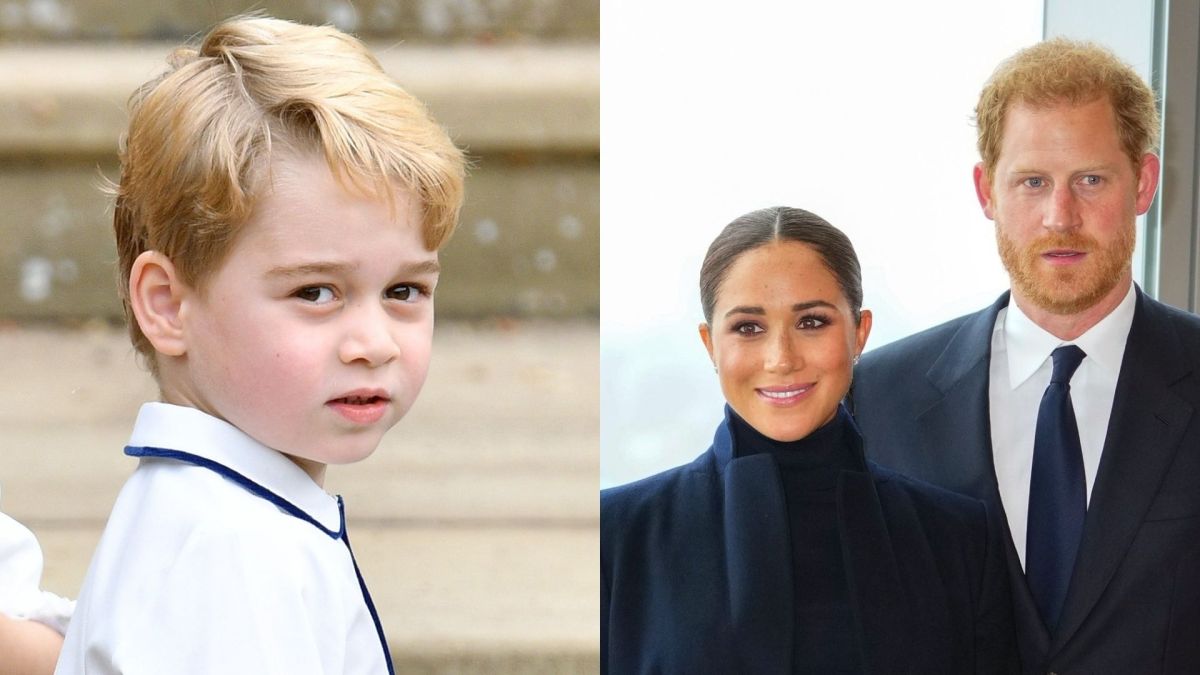 A sweet photo of Prince George released in 2020 would have been a major ‘red flag’ for Prince Harry and Meghan Markle about their position in the Royal Family.

Every time a new photo of Prince George is shared, fans are thrilled to see a new glimpse of the future king, from his highly anticipated birthday portrait to his appearance in the Cambridge family 2021 Christmas card. eight years old, however, and Despite being one of the Queen’s great-grandchildren, Prince George is not often officially photographed. Although perhaps one of the most memorable recent examples came in January 2020, when a special new image was released.

Alongside her were Prince William, Prince Charles and the Queen, all showing the highest in the royal line of succession. The snap marked the start of a new decade and it wasn’t until weeks later that Prince Harry and Meghan Markle “stepped back” as senior members of the Royal Family.

Now it has been suggested that although the release of Prince George’s photo did not directly inspire their decision, it could have been a ‘wake-up call’ to their position in The Firm going forward.

📸 To mark the start of a new decade, a portrait has been released of Her Majesty The Queen and Their Royal Highnesses The Prince of Wales, The Duke of Cambridge and Prince George. The portrait was taken by Ranald Mackechnie in the Throne Room at Buckingham Palace. pic.twitter.com/ER5nqBMpz0January 3, 2020

As reported by The Mirror, royal commentator Neil Sean had taken to his YouTube channel to share his thoughts on how the photo showed “where the next phase is” of the monarchy.

He reportedly said: “We have Prince Charles, Prince George and of course Her Majesty the Queen. And that was going to show, alongside William, where the next phase is. Well, of course, if you look at the photo, it all makes sense. Obviously, this is the next line-up.

Neil also expressed his belief that the Sussexes had already thought about the kind of life they wanted together before the photo was published.

“Harry and Meghan had decided more or less within the first few months of meeting that they could have a different life,” he claimed. “It wasn’t exactly laid out word for word, which is what we ended up with, but certainly for Prince Harry, he wanted to have a different role in his life.”

He continued: “We had seen it before with him trying to branch out into the military, and of course, alongside Kate and William, he started these mental health charities.”

The royal commentator also suggested that Prince George’s photo could have given the Sussexes the idea that they would not be the ‘superstars’ of the royal family in the future.

He said: “I think it could have been kind of a wake-up call to realize that maybe he and Meghan would never really be the superstars of the British monarchy. That’s not to say they don’t win. not as much or more interest than other senior members of the British Monarchy, but sometimes that can be the wrong interest.

It comes as Prince Harry and Meghan Markle spent their first Christmas as a family of four in the United States. It’s unclear when they could return and reunite with Prince George and the rest of the Royal Family, although fans are no doubt hoping the Sussexes will attend the Queen’s Platinum Jubilee celebrations later this year.