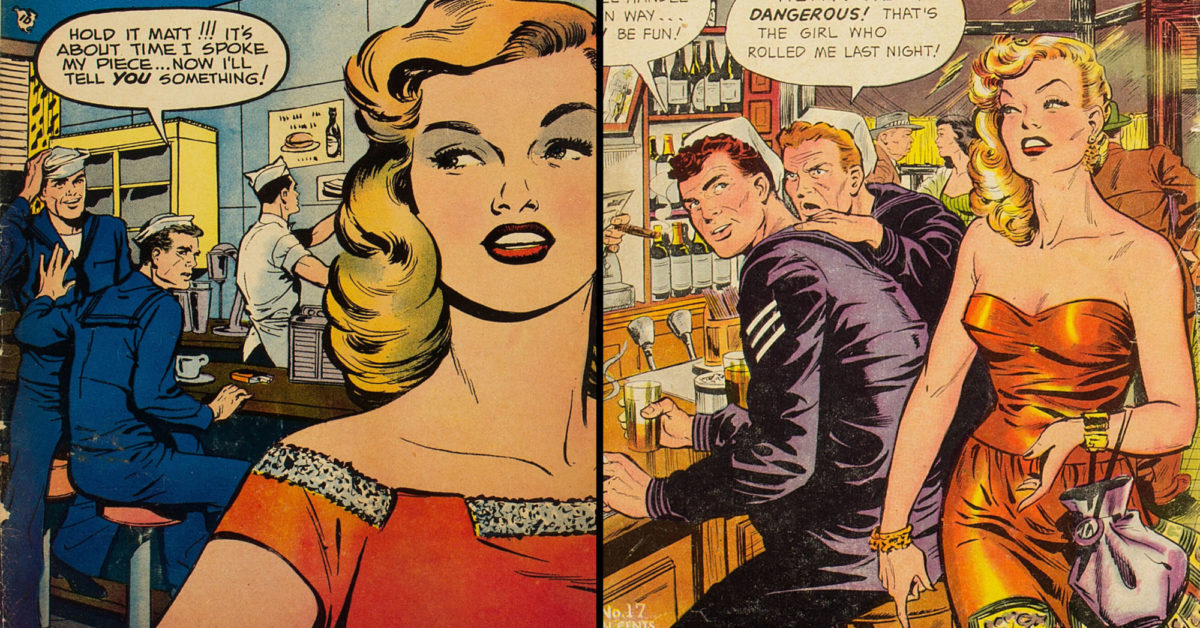 The Secrets of True Love #1 is an atypical and very rare comic strip. This issue, Atom-Age Combat #1 and Little ghost #1 are the last comic strips ever published by St. John Publications. It is also of course the last of the great St. John romance line, and the last comic book cover of St. John attributed to Matt Boulanger by a very wide margin. And somewhat famously, this appears to be a different version of his cover for War novels #17 from 1953. Aside from the mystery behind, The Secrets of True Love #1 is an incredibly rare comic, and this The Secrets of True Love #1 (St. John, 1958) Condition: VG- Available Aug 11, 2022 Matt Baker Showcase auction #40190 is the first copy of the issue Heritage Auctions has ever sold.

The circumstances that led to this unique title require unboxing, but it ultimately begins here: August 13, 1955, the owner of St. John Publications Archer St. John was found dead in the apartment of a former Powers model, along with the New York Daily News proclaiming: “Two shadowy West Side figures, a man and a woman, suspected of giving dope pills to magazine publisher Archer St. John, were hunted down last night by detectives investigating the mysterious death of St. John’s in the penthouse apartment of a Former Powers Model.”

The company came under the control of Archer’s son, Michel Saint-Jeanwith the assistance of the Managing Director of St. John Publications Richard E. Decker. According to the artist’s account Lou Cameron as linked in Matt Baker: The Art of Glamor, Michael St. John cleaned up the company, and Baker was fired. Interestingly, Archer St. John seemed to have set up the company’s comic book line to survive the comic book code transition brilliantly earlier that year, taking over several United Features properties for comic book publishing. drawn, such as Fritzi Ritz, Nancy and Sluggoand Tip Top Comics. A Jackie Gleason licensed title had been added alongside the ongoing hit Abbott and Costello series. Terry-Toons properties were always a mainstay of the publisher’s comic book line.

Meanwhile, St. John experimented in the magazine business in the early 1950s with varying success. Notable for Baker collectors is the 1953 era Pulp Monthly Digest Manhunt, which contains illustrations by Baker. And in late 1955 Baker’s work appeared in the first issue of the St. John’sPlayboy clone” men’s magazine Nugget.

However, the idea that Michael St. John cleaned up the house immediately after his father died seems inaccurate. The latest issues of Diary Secrets, Cinderella’s Loveand Go steady all hit the newsstand before Archer St. John died. Teen Romances #45, the last issue of the title with a copyright/on-sale date of October 1, 1955 had a cover that was almost certainly attributed to Baker before Archer St. John’s death. And really, all of the romance line content was reprints with new covers since June 1954, just like Authentic Police Cases and at least some of the rest of the non-humorous line. It’s pretty clear that following the 1954 Senate subcommittee hearings that covered the comic book industry, St. John decided to proceed with caution. In fact, it seems likely that he cut inside story assignments drastically when hearings began in April 1954. It was this decision that ultimately dramatically changed the fate of St. John’s comic book line. Matt Baker’s last new interior art for the St. John comics appeared in cover issues dated June 1954. He certainly saw the writing on the wall here long before St. John’s died in August 1955 , at least as far as the publisher’s line of comics is concerned.

That said, St. John Publications’ comic book publishing business slowed considerably shortly after Archer St. John’s death. Rather surprisingly and in what was the biggest blow to the company, it appears that the death of St. John’s resulted in the immediate loss of the Terry-Toons license, which was later reclaimed by Pines. The Universal Features comics ran until the July 1957 cover issues and were then taken over by Dell. Everything else was gone by then, and the St. John comic line went on a four-month hiatus. He returned with a small flurry of new title attempts for the cover issues dated November 1957, which quickly ended with the final cover of the St. Johns comics dated February 1958: Little ghost #1, The Secrets of True Love #1and Atom-Age Combat #1.

Sure, Atomic Age Combat had been a revival of St. John’s 1952/1953 title of that name. Al Fago was packaging/editing the St. John line of comics during this post-Archer St. John era, and he briefly continued Atomic Age Combat and little ghost using his publishing company Fago Magazines. The fact that he didn’t try to carry on The Secrets of True Love may imply that it sold poorly. Certainly the St. John 1958 Atom-Age Combat #1 is anecdotally a fairly common comic for its time for comparison.

Although it is quite clear that the cover of The Secrets of True Love #1 is an alternate version of the cover of War novels #17, how it was published by St. John in 1958 (it actually hit newsstands in December 1957) is a bit of a mystery. Baker’s St. John comic book assignments had passed more than two years previously, and it is extremely unlikely that he submitted them to St. John after that. But it’s also clear that this cover wasn’t inked in 1953 with its War novels #17 companion. Although there is conflicting data as to whether Baker had an office in St. John during this time, assuming he was a freelancer, a penciled cover submitted and rejected before passing it on to inker would likely have been held back by Baker to possibly rework and resubmit elsewhere down the road. Still, it’s not hard to imagine this piece in some form walking around the office for some reason. But whatever it was, it ended The Secrets of True Love #1, it seems likely that the published piece also had post-Comics Code revisions. The scene takes place in a cafe or restaurant rather than a bar with the sailors drinking alcohol, which seems unlikely to have been Baker’s original intention, given the context of the previously released version. And the style of the woman’s dress was made much more conservative.

The rarity and mystery of The Secrets of True Love #1 offers us a nice little hook into the last days of St. John Publications, and you have a rare chance to get a The Secrets of True Love #1 (St. John, 1958) Condition: VG- Auctioned at the August 11, 2022 The Matt Baker Showcase Auction #40190 at Heritage Auctions. Are you new to the Matt Baker collection or want to know more? Bleeding Cool takes a deep dive into Matt Baker’s comic art history as we approach this auction. If you have never bid on Heritage Auctions before, you can get more information, you can check out their FAQ on the bidding process and related questions.

Secrets of True Love #1 (St. John, 1958) Condition: VG-. A very rare book – this is the first copy we’ve seen in our 22 years of comic book auctions. The last romance issue St. John ever published was in February 1958, the company’s last comic book publishing month, period. By the way, the scene is. Matt Baker drew the cover, a toned down reworking of the scene from war novels #17. Overstreet 2022 VG 4.0 value = $64.