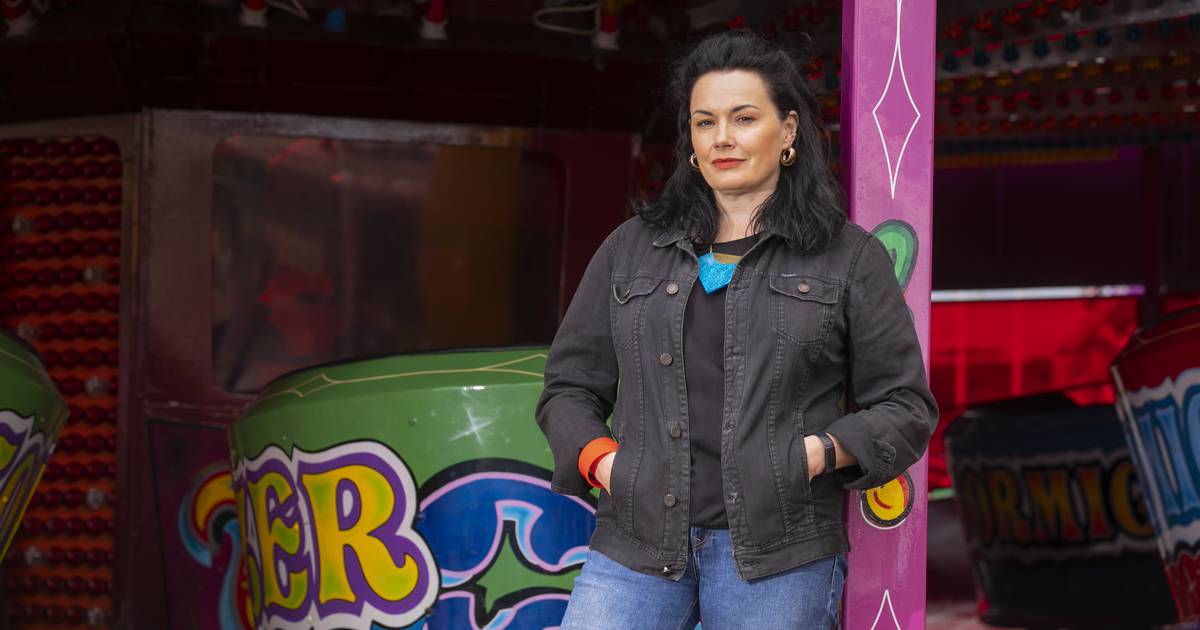 There is a moment of hesitation when I ask Aingeala Flannery if she would prefer to sit inside or outside. We meet at the Coastguard Cultural Center cafe in Tramore, Co Waterford. Outside, picnic tables overlook the choppy, choppy Atlantic and the shore that curves like an accusing finger. Clouds are sliding across the sky and there is an imminent threat of rain.

The interior offers guaranteed warmth and no chance of the tape recorder getting wet. But the tables are close together and the café is crowded. The people sitting with pots of tea and scones don’t look like tourists, which means they’re probably residents of the town that inspired Flannery’s first novel, The Amusements. She looks around for a second and decides we’ll risk staying inside.

She seems a little more concerned with how the novel is received by locals than how it will be received by literary critics. “I hope if people here read it, they will see it as a loving portrait. And it is fiction. It’s not a travelogue,” she says once seated.

The people of Tramore need not worry. The Amusements is a deliciously delicious and warmly empathetic jaunt through low-stakes scandals, bitter heartbreaks, rude awakenings and redeeming moments in the lives of the inhabitants of a place that could be anywhere, and that is both quite particular to this Victorian seaside town. .

Flannery was born in the city of Waterford and spent her early childhood on an estate near the glassworks, before moving first to rural Kilkenny aged eight and then to Clondalkin. She never returned to Tramore except for the occasional holiday, but the place impressed itself on her in her early childhood. She seems to have absorbed the town’s dialect and eccentricities almost by osmosis, listening to the conversations of her mother and aunts. “That’s what I grew up listening to. I knew their accents. I knew their attitudes and opinions. It’s not based on my family, but I could hear their voices,” she says.

As a journalist with private ambitions to write fiction, Flannery is not unique. But a few things set it apart. The first are the efforts she made to get there. Five years ago, she quit her 16-year job as editor and producer with Today FM, a role she loved. She gave up several freelance gigs, including a column at a restaurant, and took a part-time job in the arts to allow her to pursue fiction while her son, then 10, was away. school. “This [got] at the stage where I was well into my 40s and I thought to myself, am I really going to do this one day? I’m not until I do it,” she says.

“It was a really big financial decision. And it didn’t really work out. I realized in the summer that we didn’t have any money. So I Airbnbed my house, and we did some surfing with friends for the summer. My son was quite young so it was a bit of an adventure for him, and luckily I have friends who have much nicer homes than me. And they all have pets and they were on vacation” and needed someone to take care of the house.

She insists it was less stressful than it looks. “I don’t worry much. I don’t care about money. I have a very old car. I don’t care about clothes. I don’t care about vacations. I care about having a roof over my head and loving what I do every day. And my son is fine. And, listen, we have to stay in very nice houses. I had to move out of my house, but I was able to go back in September. I mean, I wasn’t homeless.

It’s just a shame, she laughs, “I wasn’t better at math and personal finance.”

She texts me later to add that an Arts Council Literature Fellowship she got in 2020 and 2021 kept her afloat. “I don’t believe I would be able to juggle and make ends meet going into book two without it.”

Taking such a big leap of faith meant “I needed to make it work. There was no faffing around. I was quitting a job where people would cut their arm off, so it had to work.

The second thing that sets her apart is that she actually finished a novel and got it published. The third is that it’s wonderful. Her writing has been compared to William Trevor – by no less a writer than Anne Enright – and, more than once, to Elizabeth Strout.

Both comparisons delight her. Strout is one of her favorite novelists and in the thanks she writes The Amusements owes thanks to William Trevor’s devastating short story, Honeymoon in Tramore. Flannery had worked on an earlier novel which was shortlisted for the 2018 Irish Writers Center Novel Fair and eventually got it into the much sought after MFA in Creative Writing at University College Dublin, “but it didn’t work out. J I really struggled with that.

She came across the news about Trevor. “I had never read anything that happened in Tramore, which surprised me. It’s so generous to writers, there’s so much color here, so much history. And I just thought, wow, the writers really missed that. I will try to do it; I’m going to write a Tramore story.

His first “Tramore story” was Court Order which won the Bath Short Story Award. Another Tramore story followed, Visiting Hours, about a little girl called Helen Grant who goes to visit her father in hospital in the weeks before Christmas, which won the 2019 Harper’s Bazaar short story contest. She tried to go back to the novel she was working on, “but Helen wouldn’t get out of my head.”

Another story followed – Kamikaze, this one up for the Francis MacManus Award – “and I found myself thinking, is that Helen in this story? And then I realized, it’s not Helen, it’s Helen’s friend. At this point she realized, “It was no longer a collection of short stories, it was a composite novel.”

Eventually she started to sew all the threads together. What emerged was a rich tapestry of stories with a cast of interconnected characters snaking through the pages, showing up in places that surprised even Flannery. “It was like knitting an Aran sweater and dropping a stitch somewhere here and having to go back,” she says. “I had all the post-its. I had Venn diagrams, which was ridiculous because I suck at math. In the end, I got chalkboard paint and painted a wall in my kitchen. It was pretty ugly, but it really worked.

Flannery did not have a book education. “My parents weren’t readers. There were only two books in our house, Brown Lord of the Mountain by Walter Macken and Light a Penny Candle by Maeve Binchy.

But there were always newspapers and the radio was always on. As a child, she dreamed of being a journalist. “I thought I would be John Pilger or someone like that. I wanted to go on a crusade and save the world, but I ended up on the radio.

On the side, she was constantly writing. Her bylines included a restaurant column she wrote for the Irish Independent for several years – a clue to her future credentials as a novelist may have been the fact that she wrote almost as much about the people she dined with as on the food itself. “If you had put them all together, you could have followed the life stories of these people. In retrospect, it all makes sense,” she says.

She also had a sports column in the Evening Herald and wrote essays for Image magazine. But it wasn’t until she won an award for her writing in a magazine that she realized that if she wanted to try fiction, she had to retire from “all-consuming” journalism.

Flannery is a “very slow” writer, editing and re-editing every paragraph before she can move on. The very idea of ​​hammering out an ugly first draft isn’t for her. “I couldn’t stand it.”

The process can be torturous at times, but she relishes it. “When I gave myself the time to do it, it was so rewarding to be able to enter at the level of words.”

Doing the Masters in Creative Writing under Anne Enright was “incredible. Being able to sit there with your work and have Anne Enright perusing your work. It was really special.

Unlike other novelists, who insist they never read anything written about them, she plans to read all the reviews. “I want to improve. I want to do the best job that I can do. Anyway, I’ve been a critic for years, it would be a bit rich to say that I don’t want to know what other people think of my work.

The Amusements by Aingeala Flannery is published by Sandycove