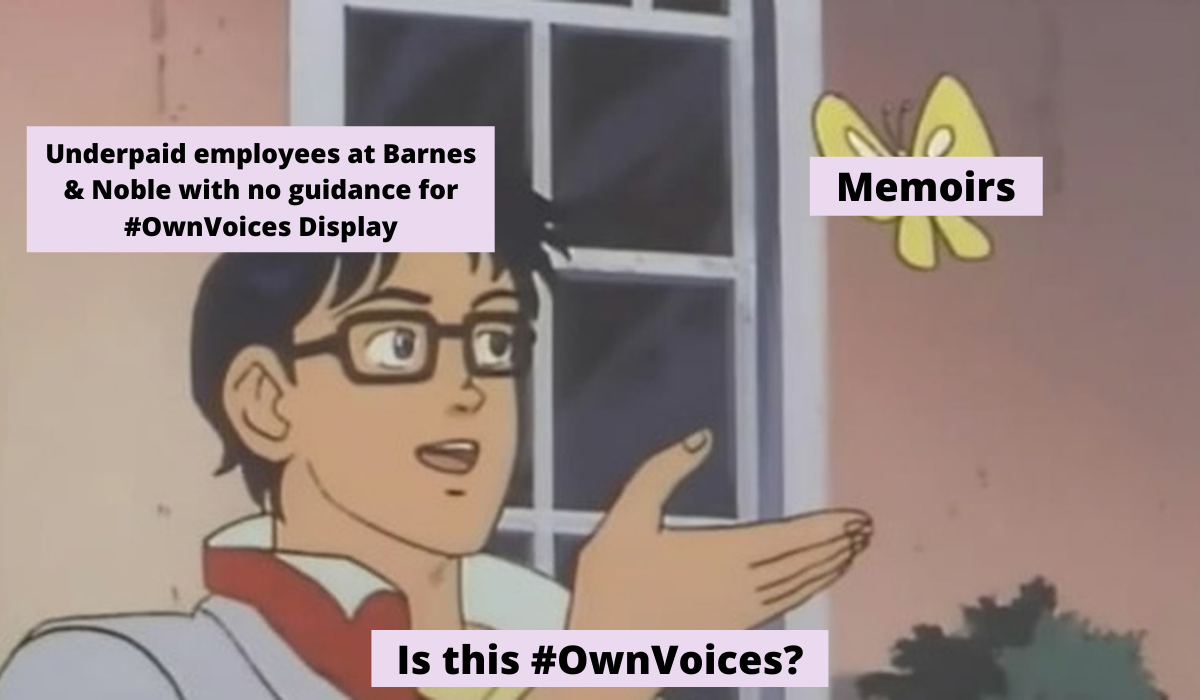 The discourse around #OwnVoices has changed a lot over the past six or seven years. To put it simply (for now), #OwnVoices generally refers to fictional novels featuring places and characters from a specific background written by authors of similar experience. The idea is to uplift people who are marginalized because of their race, ethnicity, sexuality, ability, nationality, religion, etc., because the publishing industry and Booksellers often donate resources to those outside of these communities to tell their stories. (Or “flood” in the case of Jeanine Cummins American dirt.)

At no time has this term ever been used to describe non-fiction autobiographies and memoirs in general, especially those unrelated to marginalization. Unfortunately, a Barnes & Noble tasked with setting up a #OwnVoices table didn’t get the memo.

How did it happen

In addition to the issue of fiction versus non-fiction, we know there is a big gap in understanding. Even the books of the full (cropped) image, shared by author Ivelisse Housman (which shows about half of the painting), are not very diverse.

A commenter (not from the exact location) said that Barnes & Noble head office no longer sends employees a list of books to include for their table boards. This decentralization allows individual stores to choose books based on the needs of their communities, which is likely a net benefit because they know their community better. This is why those at BookTok also see different Barnes & Nobles accounts based on location.

Unfortunately, those already underpaid employees (most earn minimum wage or a dollar above in their states) at the largest chain of brick-and-mortar bookstores probably don’t have time at work to figure out what that means. term. .

They won’t experience #OwnVoices unless they’re in a community with other bookish people online. That’s why, even if the company puts the work on the employees, I’m not going to sit here and be completely upset about this particular store location.

Barnes & Noble (if they continue to use #OwnVoices) should pivot a sub-theme for stores based on identity and use their vast resources (not that) to provide advice to stores. Additionally, ongoing DEI training for more diverse and better paid staff would help mitigate such mistakes, if only to drive sales by appealing to an increasingly diverse audience that will choose alternatives.

Why do people completely drop the term

This diversion is emblematic of the fact that the expression has become more and more diluted over time, after publishers and chain stores have taken it over. On June 6, 2021, advocacy group We Need Diverse Books released a statement explaining why they also decided to drop using the term. They wrote:

#OwnVoices was created as a hashtag by author Corinne Duyvis in September 2015. It was originally designed as a short-form book recommendation tool in a Twitter feed, allowing readers to recommend books by authors who openly shared the diverse identities of their lead characters. The hashtag was never intended to be used in a broader capacity, but has since widened in usage to become a “catch-all” marketing term by the publishing industry. The use of #OwnVoices in this capacity raises issues due to the vagueness of the term, which has subsequently been used to place various creators in uncomfortable and potentially dangerous situations. It’s important to use the language that the writers want to celebrate about themselves and their characters.

These “uncomfortable and potentially dangerous situations” include circumstances such as authors who are not publicly “excluded” in some capacity, for security reasons, being excluded from the positive elevation provided by #OwnVoices. Another example I’ve seen is feuds within diasporas as the disconnect grows between author intent and marketing motivation (by the publisher) to appear inclusive.

There continue to be many more conversations about whether #OwnVoices is doing more harm than good. Either way, in all of these situations, people tend to be at least on the same page that we’re talking about fictional narratives and marginalization, not Hunter Biden’s memoir.

—The Mary Sue has a strict commenting policy that prohibits, but is not limited to, personal insults towards anybodyhate speech and trolling.—

Do you have a tip we should know? [email protected]